BCCI CEO Rahul Johri has been named among the top-10 Sports Business Executives of 2017 for anchoring a billion dollar IPL deal.

New Delhi: BCCI CEO Rahul Johri has been named among the top-10 Sports Business Executives of 2017 for anchoring a billion dollar IPL deal for the world’s richest cricket body at a time when the going was tough. According to a poll conducted by noted portal www.SportBusiness.com, Johri was placed fourth, primarily for BCCI getting richer by USD 2.55 billion after Star bagged the global media rights for Indian Premier League. Johri was also credited with anchoring IPL title sponsorship rights for USD 340 million. The other Indian in the list is Ipsita Dasgupta (President, Strategy & incubation, Star India), who was placed at No. 2 for her role in growth of popularity of Pro Kabaddi League. The top spot went to Ioris Francini, Co-President WWE- IMG, who was conferred with ‘SportBusiness Executive of The Year’ award for “being the undisputed driving force behind the storming year for IMG”.

TOPICS:
India BCCI Board of Control for Cricket in India Rahul Johri 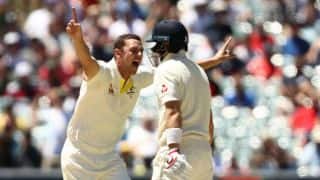