It effectively means that Tendulkar won't be a part of the new coach selection process after World Cup unless CoA gives proper terms of reference.

BCCI Ethics Officer Justice DK Jain Monday dismissed the Conflict of Interest allegations against Sachin Tendulkar after the cricket icon refused to be part of the Cricket Advisory Committee (CAC) unless he is provided with agreeable ‘terms of reference’.

Jain in a two-page verdict described the allegations as “infructuous” (pointless), ruling that the matter had to be disposed off after Tendulkar made his position clear that he will not “act as such” a member of the CAC.

“Once the BCCI furnished the terms of reference and tenure, he will decide on the course of his participation in the same. Mr Tendulkar doesn’t consider himself to be part of any Cricket Advisory Committee and will not act as such. In consequence, the present complaint doesn’t survive for adjudication.”

“Resultantly, the present complaint is rendered infructuous and is disposed of, as such,” Jain wrote in his verdict.

Jain, who is also BCCI Ombudsman, said Tendulkar, through his legal Counsel Amit Sibal had issued a statement, which was enough to dismiss the case.

Tendulkar’s legal counsel’s statement read: “Without prejudice to his rights and contentions in the present proceeding, Mr. Sachin Tendulkar wishes to reiterate that he has been requesting BCCI since the inception of the CAC that terms of reference and his tenure is furnished to him.

“He has requested this repeatedly and several times over the years including as recently as on 7.12.2018. He is now left with no other choice but communicate to BCCI that until and unless the BCCI furnishes the terms of reference and tenure of his appointment in the CAC, he has decided not be part of any committee of the BCCI including the CAC.”

It effectively means that Tendulkar won’t be a part of the new coach selection process after World Cup unless CoA gives proper terms of reference.

It was Madhya Pradesh Cricket Association (MPCA) life member Sanjeev Gupta, who had alleged that both Tendulkar and VVS Laxman are conflicted for performing dual roles as CAC member as well as mentor/icon with their franchises Mumbai Indians and Sunrisers Hyderabad respectively.

However, Tendulkar in his affidavit had categorically denied that he has any financial agreement in both his roles and hence doesn’t come under tractable ‘conflict of interest’.

It has been learnt that CoA is ready with terms of reference and will be handed over to him now that the case is over. 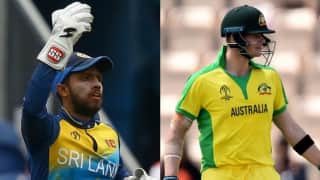 AUS vs SL, Match 7, Cricket World Cup 2019 Warm-up, LIVE streaming: Teams, time in IST and where to watch on TV and online in India