The Board of Control for Cricket in India (BCCI) does "have its own reasons" for opposing the controversial Decision Review System (DRS), according to International Cricket Council's (ICC) Chief Executive Dave Richardson who admitted that the DRS technology was not foolproof yet. 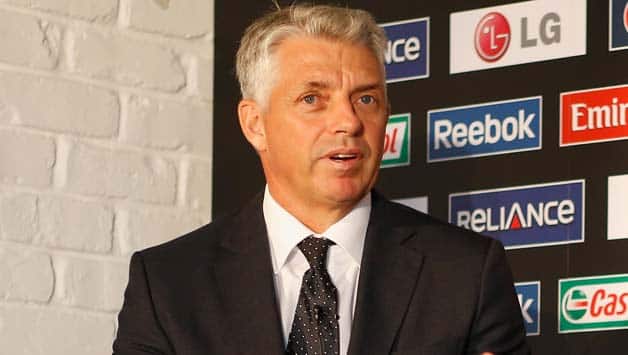 The Board of Control for Cricket in India (BCCI) does “have its own reasons” for opposing the controversial Decision Review System (DRS), according to International Cricket Council’s (ICC) Chief Executive Dave Richardson who admitted that the DRS technology was not foolproof yet.

The DRS has come under scanner in the wake of the controversial first Ashes Test between England and Australia which witnessed a number of umpiring howlers.

“India have got good reasons [for opposing] and some issues are debatable. Obviously we can improve and discuss on things like three reviews,” Richardson told former England captain David Gower during a television interaction at the lunch break on the opening day of the second Ashes Test.

“The fact is that there are 10 members and each has got a vote. Anyone can say that “listen we don’t want to agree”. If atleast seven countries are ready to agree to use DRS, it will be done,” he said.

The Test at Trent Bridge which witnessed some umpiring howlers was a “difficult one”, said Richardson, a former South Africa wicketkeeper.

As to why ICC issued a press release on the umpiring statistics after the match, Richardson replied, “I think we needed to put things straight. It was a dificult Test match and the pitch wasn’t easy one. Every five overs, something was happening and we needed to come clean and admit the errors. There were seven umpiring errors and four were corrected.”

“In an utopian world, we love everything to be perfect but that’s not the case. Despite all the guidelines and protocols, we still have aircrashes,” he said.

On Gower’s query on whether the best English or Australian umpires be allowed to officiate, Richardson answered, “We have given it a thought of having non-neutral umpires but then if he makes a mistake, the perception of being bias comes into picture.”

The other issue that is on the priority list for ICC is zero tolerance towards corruption.

“It’s big issue as far as some of the domestic T20 leagues are concerned.”