The only recourse the board now has is to seek an extension for the AGM from the Registrar of Societies.

he Indian cricket board is likely to approach the Registrar of Societies seeking a three-month extension for convening its Annual General Meeting (AGM), in a move apparently aimed at facilitating ousted chief N Srinivasan’s bid to recontest the presidential post in the election which otherwise is generally held in September-end.

The Board of Control for Cricket in India (BCCI) is being forced to postpone the elections after the Supreme Court earlier this week ignored pleas to reinstate Srinivasan as its president. It also gave two more months to the Mukul Mudgal Committee to submit the final report in the spot-fixing and betting scandal in the 2013 edition of the Indian Premier League (IPL). The scam involved 13 people, including some prominent cricketers.

A top BCCI official told IANS on condition of anonymity that the only recourse the board now has is to seek an extension for the AGM from the Registrar of Societies. The BCCI is a registered body under the Tamil Nadu Societies Registration Act.

“We have to take every step cautiously. We are also thinking of seeking a three-month extension from the Registrar of Societies to postpone the elections. The BCCI will be taking legal advice and will also go through the court order carefully before taking a final call,” the senior official told IANS.

As per the rotation policy of the BCCI, it is east zone’s term to nominate a candidate, and Srinivasan reportedly is looking to get himself nominated by the Cricket Association of Bengal (CAB). Srinivasan, seeking re-election for a third term, has been removed as the BCCI president by the Supreme Court pending investigation in the spot-fixing and the betting scandal in the 2013 Indian Premier League (IPL).

Asked about the urgency for seeking an extension, the official said the signatures of the president, secretary and the treasurer are needed for filing the annual report for the AGM.

The BCCI elections are slated by the end of this month since Srinivasan, who has also been elected as the International Cricket Council (ICC) chairman, was elected unopposed for a third year in office September 29 last year. 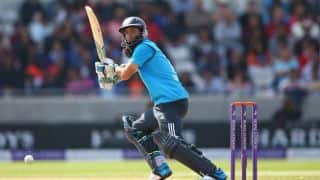