The members expressed their thoughts after going through the Justice Mudgal Committee report.

The Board of Control for Cricket in India (BCCI) members said on Tuesday that there is ‘no taint’ on N Srinivasan, who was forced to step down from his post of the board’s president in the wake of Indian Premier League (IPL) 2013 spot-fixing and betting scandal.

The members of the cricket board expressed their thoughts on the matter after going through the Justice Mudgal Committee report, during their all-powerful Working Committee meeting in Chennai on Tuesday.

Justice Mudgal Committee, which was entrusted with the investigation of the Indian Premier League 2013 (IPL) spot-fixing scandal has told Supreme Court (SC) that ICC chairman and former BCCI chief N Srinivasan is not involved in any kind of match-fixing activity, according to the Press Trust of India (PTI). 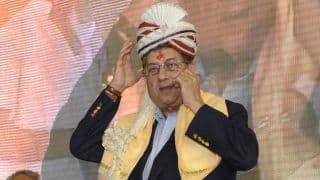