Accelerating their efforts to find a new coach for the national cricket team, the BCCI on Sunday decided to advertise for the position.

Mumbai: Accelerating their efforts to find a new coach for the national cricket team, the BCCI on Sunday decided to advertise for the position and set June 10 as the deadline for applications. “We will advertise for the post of coach today and by June 10 anyone can apply and shortlisting will be done after that,” said newly-elected BCCI President Anurag Thakur at the BCCI headquarters. “We are keeping it open, we want people to come. They can come forward, apply and then we can look at the proposals, who are the applicants and who are best for BCCI,” he added. Thakur: Selectors to take final call on IND squad for ZIM

The announcement means the Indian team will be without the services of a full-time coach on its short tour of Zimbabwe beginning June 11. However, the coach appointment is expected to be made before the team travels to the West Indies in July for a four-match Test series. Asked whether a second-string team would be fielded for the tour of Zimbabwe, Thakur said senior players will have the option of taking a break by opting out of the series which will feature 3 ODIs and 2 Twenty20s. Anurag Thakur in favour of implementing ‘practical’ Lodha Committee recommendations

Earlier today, former India captain and BCCI’s Cricket Advisory Committee member Sourav Ganguly said that the board will take another couple of months to find a suitable candidate for the high-profile position. “It will happen in the next couple of months. I am not too sure if it happens before the Zimbabwe tour because it is not too far away,” said Ganguly, who is on the advisory panel, alongside Sachin Tendulkar and VVS Laxman. Gavaskar, Nikhil Chopra, Boria Majumdar happy for Thakur

Since Duncan Fletcher’s departure, India played under the guidance of team director Ravi Shastri, whose tenure ended with the World T20 in March-April. “It [the coach position] is open for everyone — outside India, within India — anyone who is willing to take up any responsibility in all these positions — batting coach, bowling coach, fielding coach, head coach — will be available. We will inform you after the IPL final on the May 29,” Thakur said.

For the tour of West Indies after Zimbabwe, Thakur said a chef could be sent with the team to ensure that food is of players’ liking. “During the West Indies tour we are thinking of sending a chef with the team. Food should not be a constraint. If you are not comfortable with the food how can you perform well?” he said. 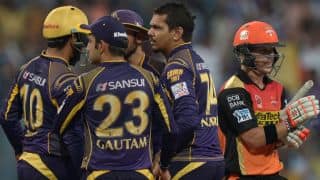