Michael Clarke will play his final Test against England at The Oval.

The Board of Control for Cricket in India (BCCI) paid their respects to Australia captain Michael Clarke after he had earlier announced that he will retire from international cricket after the final Test at The Oval. The decision came after Australia were trounced by England by an innings and 78 runs in the fourth Ashes Test at Trent Bridge. Clarke will play his final Test in the fifth Test and bid adieu to the longest format. He retired from One-Day International (ODI) after leading Australia to a win at the ICC Cricket World Cup 2015 in March. Clarke is currently the fourth highest run-scorer for Australia in Tests. READ: Michael Clarke to retire after Ashes 2015: Twitter Reactions

He might have called it time on his career but @MClarke23 has left a lot of memories to cherish #ThankYouMichael pic.twitter.com/aiXvClmqfT

Clarke was was under serious scrutiny from the Press and some former cricketers leading up to the game as he has not performed very well in the recent past. Clarke apparently had a discussion with chief selector Rod Marsh ahead of Day Three of the Trent Bridge Test where the skipper was informed that he does not feature in the scheme of things after the ongoing series. Clarke hence took the decision to walk out on his own, rather than being forced to do so. READ: Michael Clarke retires from international cricket, says it is the right time

Clarke made his Test debut against India at Bangalore in 2004, where he scored a century on debut, which led Australia to a win. He also won the man of the match for his 151. Clarke is no mug with the ball either. He has picked up 31 Test wickets as well, but has not bowled of late as has known to have persistent back injuries. VIDEO: Michael Clarke cries while talking about his retirement from international 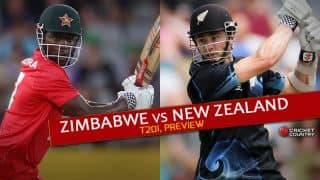