BCCI president Anurag Thakur has written a letter to Justice RM Lodha panel, intimating them that he is ready to meet the members of the panel any day after November 9.

New Delhi: BCCI president Anurag Thakur has written a letter to the Supreme Court appointed Justice RM Lodha panel, intimating them that he is ready to meet the members any day after November 9. A reliable BCCI source confirmed the development. “Yes, the president has informed the Panel that he is ready to meet post Wednesday. In his affidavit also, he had already apologised that he could not appear before the committee as the Monsoon session of Parliament was on at that point of time,” a BCCI official in know of things told PTI today. ALSO READ: Thakur, Shirke file respective affidavits to Lodha Committee

During the meeting last August, Secretary Ajay Shirke had appeared before the panel. It has been learnt that both Thakur and Shirke will meet the panel together to discuss the implementation of the recommendations. In fact, Thakur filed a 19-point Compliance Report as per Supreme Court’s directions, in which he stated about the practical difficulties in implementing the Lodha Committee reforms in totality. Thakur in his affidavit has stated since neither he nor the secretary (Shirke) have a vote, they cannot force the members units) to accept the recommendations.

In fact the freezing of annual grants has not been able to deter the state units who still maintain that BCCI is being run by Tamil Nadu Societies Registration Act. Some of the major objections raised by the BCCI are One-State One Vote (Mumbai, Baroda, Railways etc lose voting rights), age cap of 70 years, One person-One Post, three-year cooling off period, three national selectors to name a few. 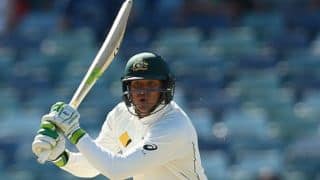