In what could first of its kind, IPL could soon be a bilateral-free window from 2020 onwards. During the ICC meeting held at Singapore on December 7 and 8, BCCI presented a revised schedule with proposal to all the other cricketing boards to keep their players free from bilateral commitments during the IPL months April and May. While the remaining boards have agreed to the proposal only ECB is yet to amend to the new plans.

Considering ECB s cricketing season begins from their summer i.e. June, BCCI believe ECB might soon agree to the proposal. This new proposal that is set to go underway after ICC 2019 World Cup, will be discussed during the SGM meeting in Delhi on December 11.

Sources who are working closely with the developments told The Times of India (TOI), IPL will be the only global marquee event from 2020.

A week ago, Virat Kohli had expressed disappointment on the cramped Indian cricket schedule. Kohli, MS Dhoni and Ravi Shastri were to meet CoA for the same on December 6. However, due to inadequate support documents from BCCI, the CoA had to postpone the meeting for later.

During the meeting with ICC, BCCI presented a revised structure for India s home season. In the new structure, India would not be playing away series between October and November and February and March during 2019-2023.

As further reported on TOI, BCCI is coming out with the media rights tender for Indian cricket later this month and India do not play at home for entire 2018. 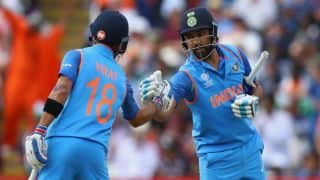