The BCCI has decided to invite more applications for the post of Indian team's coach to give Cricket Advisory Committee (CAC) a wide range of options for picking a suitable candidate.

New Delhi: The BCCI has decided to invite more applications for the post of Indian team‘s coach to give Cricket Advisory Committee (CAC) a wide range of options for picking a suitable candidate. The cricket Board’s move came following Anil Kumble’s acrimonious exit from the job. Kumble yesterday refused extension of his contract till the West Indies tour, citing captain Virat Kohli‘s reservation over his ‘style’ of functioning. A top BCCI official associated with the process told PTI that another 7-10 days may be given for fresh applications so that other interested candidates with suitable qualification and stature can apply for the top job. READ: BCCI President CK Khanna hopes Anil Kumble stays associated with Team India

“Look, when we had invited applications last time, Anil was an automatic entry. That might have prompted a lot of people from thinking that what’s the need to apply when current coach is doing well and is in the mix,” a senior BCCI official told PTI. “Now the situation has completely changed. A lot of people will now be interested knowing it’s an open field,” the official added.

When BCCI had advertised the post, the last date to send application was May 31. Asked about Virender Sehwag, who is considered favourite, the official said, “Sehwag’s application has no relation with BCCI to call for more applications. In the end, it would be CAC which will decide on the next coach. More the options, better the choice.”

As of now, Sehwag, Tom Moody, Lalchand Rajput, Richard Pybus, Doda Ganesh are the applicants. Former Australia bowling coach Craig McDermott also had applied but it was rejected as it didn’t come on time. 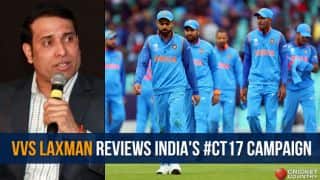