The structural overhaul of the International Cricket Council (ICC) is all set to trigger a financial windfall for the already rich Board of Control for Cricket in India (BCCI) which is likely to earn an estimated USD 600 million in the next eight years, Board Secretary Sanjay Patel has revealed.

“According to my estimate, within this period [2015 to 2023] of eight years we [BCCI] will get around USD 600 million,” BCCI secretary Sanjay Patel told a local news channel.

Patel was here in connection with the BCCI Working Committee meeting in the city today. Incidentally, during this 2015-23 period, India would be a permanent member of the three major committees of the International Cricket Council (ICC).

On the substantial increase in the BCCI’s revenue sharing with the ICC, he said, “Since past so many years BCCI has become one of the biggest contributors towards ICC’s earnings.”

BCCI is contributing about 68 per cent of the revenue and getting only four per cent in return, he said.

“I am pleased to announce instead of four per cent share, BCCI will now get 21 per cent. During 2015-23, BCCI’s expected gross revenue will be close to 2.75 to three billion dollars,” he said.

Under the existing provisions, 75 per cent of the ICC’s earnings are divided equally among the 10 full member countries and the rest goes to its associate members.

“Again out of the remainder, India will get another four per cent,” Patel added.

The logistical problems are also a bit on the lesser side if the tournament is taken to the Emirates as travelling involved would be a lot less.

But the flip side of organising the tournament in UAE is the cloud of bookies and match-fixing which the Emirates is notorious for. India never travelled there after the 2000 match-fixing scandal broke out.

UAE is considered a hotbed for bookies and gamblers and the Anti Corruption and Security Unit (ACSU) officials might find it tough to monitor the players from eight franchises at the same time.

Bangladesh is one venue which has seen reservations from some of the senior members of the Indian Premier League (IPL) governing council as the cities have limited five or seven star hotels. Also the corruption and match-fixing fiasco during the Bangladesh Premier League (BPL) has not been forgotten.

On to the corruption charges against the IPL, N Srinivasan chose to skirt the issue.

“BCCI is taking all steps to prevent fixing,” he said.

On reports that the Indian team’s coaching staff is set to be changed following the recent debacles in South Africa and New Zealand, Srinivasan said, “I don’t know how it got into media. The issue was not even discussed.” 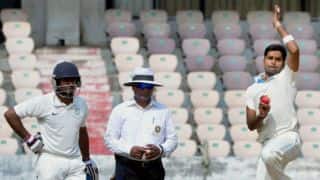