The Supreme Court-appointed Committee of Administrators (CoA) chief Vinod Rai on Monday announced that the BCCI elections will be conducted in the next 90 days which means they will be held in the last week of November.

”BCCI elections will happen in 90 days and that’s the deadline we have given ourselves. The moment the new body takes over, the COA will leave. We would do exactly what Justice Vikramjit Sen did (handover reins to DDCA’s elected body),” Rai was quoted as saying by the PTI on Monday.

Rai said CoA has maintained transparency in the decision making process but refused to comment on whether the tenure will be 9 or 18 years.

“We have tried to ensure total transparency in the functioning and decision making process of the BCCI,” he said. “There are queries [about the tenure] in Supreme Court and although I have an interpretation but I will not comment on it.”

He responded to several queries during a media interaction in New Delhi on Monday including the unceremonious exit of legendary spinner Anil Kumble as India head coach last year. Ravi Shastri took over from Kumble as the new coach.

“Anil Kumble was appointed for one year and then we started a fresh process. The Cricket Advisory Committee (CAC) was part of the process,” Rai said. 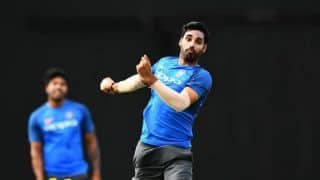 Bhuvneshwar Kumar declared fit, will play for India A in quadrangular series