A discussion was held on the same during the BCCI officials’ informal meeting last Sunday.

The Board of Control for Cricket in India (BCC) is mulling over the idea of naming a series after cricket legend Sachin Tendulkar.  A discussion was held on the same during the BCCI officials’ informal meeting last Sunday, according to reports.

“It is too premature to talk about it at the moment. Before naming a series after Tendulkar, we have to first get into a bilateral series talk with some country. We should first get a commitment from the other board. We want a prestigious series to be named after Tendulkar,” Sanjay Patel, the BCCI secretary, was quoted as saying by a daily.

When India host England, the series is called Anthony De Mello Trophy, which is named after one of the BCCI founders, Anthony Stanislaus de Mello. 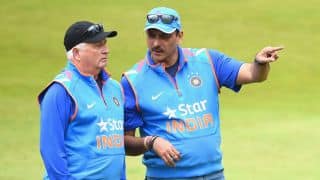