Rahul Dravid and ex-Sri Lanka captain Mahela Jayawardene have been appointed to the ICC Cricket Committee.

The Board of Control for Cricket in India (BCCI) on Friday welcomed the extension of Anil Kumble‘s term as ICC Cricket Committee Chairman for another three years and Rahul Dravid‘s appointment to the top panel. Former India captain Kumble was today reappointed as Committee chairman for a second term of three years while his one-time team-mate and batting great Dravid was named as its member. BCCI secretary Anurag Thakur said: “It is indeed a matter of great pride that the two stalwarts of Indian Cricket Mr. Anil Kumble and Mr. Rahul Dravid have been named in the ICC Cricket Committee. “The three-year extension to Mr. Kumble s term as the Chairman and the appointment of Mr. Dravid to the Committee is a testimony to the fact both BCCI and the ICC want to protect the interest of the game and use the services of the best,” he said. READ: Rahul Dravid, Mahela Jayawardene join ICC cricket committee

“Mr. Dravid, who has been coaching the India A and India Under 19 teams, will be a great value addition to the committee. His experience both as a cricketer and as a coach will come in handy. I take this opportunity to congratulate both these gentlemen,” he added. READ: Anil Kumble re-elected as ICC cricket committee Chairman for 3 more years

Earlier, Dravid and ex-Sri Lanka captain Mahela Jayawardene have been appointed to the ICC Cricket Committee, adding even more cricketing experience to the list of eminent people already on the committee. Dravid and Jayawardena have played 1,161 international matches between them from 1996 to 2015, and each has been appointed for a three-year term. They will attend their first meeting at Lord’s on 31 May and 1 June, three weeks before the ICC Annual Conference takes place in Edinburgh, Scotland. 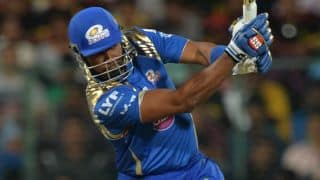