India vs Australia: Steven Smith and Virat Kohli would be meeting in Ranchi ahead of the 3rd Test to uphold spirit of cricket.

Following a heated controversy for Australian skipper Steven Smith‘s controversial Umpire DRS on Day Four of the second of the four-Test series against hosts India for the Border-Gavaskar Trophy at the M Chinnaswamy Stadium in Bengaluru on Tuesday, BCCI has withdrawn it’s official complaint they had filed against Smith and his teammate Peter Handscomb with ICC. Both BCCI and Cricket Australia (CA) released a joint statement o Thursday stating that BCCI was withdrawing the complaint while Smith and Indian skipper Virat Kohli will be meeting in Ranchi ahead of the 3rd Test to ‘uphold spirit of cricket’. FULL CRICKET SCORECARD: India vs Australia, 3rd Test at Ranchi

Earlier on Thursday, the BCCI had lodged a formal complaint with the ICC against Smith and Handscomb Peter Handscomb both were involved in foul means to use the DRS. Smith, who was trapped leg-before, consulted Handscomb before looking at the dressing-room to check whether he should go for the referral. Kohli quickly spotted it and reported the incident to the on-field umpire Nigel Llong. Llong handled the situation brilliantly, sending Smith back, stating that it was against the laws of DRS, and not allowing Kohli to intervene.

Sunil Gavaskar had earlier slammed ICC for failing to take any action against Smith after many experts believed that Smith was liable for a punishment. Earlier on Wednesday, ICC had released a statement where it said that match referee Chris Broad had not found anything that falls under a breach of the ICC Code of Conduct, therefore ruling out any action. 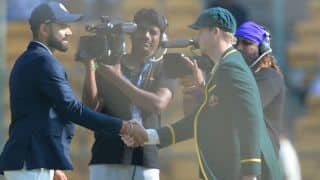