Back in 1989, it was Tambe who handed Sachin Tendulkar's India selection letter to his family.

BCCI’s longest serving employee Sitaram Tambe is set to retire. Tambe has served BCCI for over four decades handling various responsibilities. Back in 1989, it was Tambe who handed Sachin Tendulkar’s India selection letter to his family. Before social media came into presence, Tambe used to make trips to post office to send telegrams to those picked in the Indian squad. He even arranged the logistics whenever Indian team made foreign trips. When Clive Lloyd’s West Indies arrived in India in 1982-83, he had helped the them get the Indian currency and even suggested them local cuisines to try in India.

Tambe was also caretaker of trophies. In fact, he was the go-to man whenever a trophy was damaged. Interestingly, Tambe started serving for BCCI at the age of 16, just like Tendulkar. However, Tambe has one last assignment on his hand: he will be heading to Indore where the ongoing Ranji Trophy is taking place. He will crown the champions of the 2017-18 season.

Before retiring, Tambe recalled the anecdotes of Tendulkar and details on broken Ranji Trophy 2016-17 bcci.tv:

“On my first visit, Tendulkar was a teenager, but on my next, he became an all-time great”

“I had the pleasure of delivering the official letter to Sachin Tendulkar’s father at this residence. When he retired after a 24-year-long career, I had again gone to his house to get his autographs on some souvenirs. On my first visit, he was still a teenager, but on my next, he had become an all-time great.”

“I had gone to deliver the Ranji Trophy to Indore last year (2016-17 season) and when I handed it over to the crew there, the top of it broke while the trophy was being removed. It weighs 15 kgs. We called a local expert, took the trophy to his workshop and sat there till the work was complete. By the time we reached the ground with the trophy, it was 2am and when Gujarat were handed the trophy, it was in pristine condition.”

But it is not just Tambe who is bidding adieu. BCCI will also see the exit of their employees like Dr Vece Paes, Jayant Jhaveri and B Laxman. 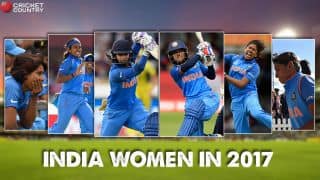 Year-ender 2017: India Women, up and shining