Both India and Sri Lanka are battling out the competition as well as the polluted atmospehere during the third and final Test at Delhi.

Although both India and Sri Lanka are battling out the competition as well as the polluted atmosphere during the third and final Test at the Feroz Shah Kotla Stadium in Delhi, it is the visitors who have been at the receiving end mostly owing to the hazardous conditions in Delhi. Experts and doctors have opined that Delhi should be barred from hosting sporting events until the pollution level decreases, as the athletes face serious health risks. However, the good news is that Delhi would not be hosting any international cricket, not before 202, thanks to BCCI‘s rotational policy. Nevertheless, it still remains to be seen whether the IPL matches get a nod ahead to be hosted in the capital. FULL CRICKET SCORECARD: India vs Sri Lanka 2017-18, 3rd Test at Delhi

On Delhi’s next international cricket date

“BCCI is pitching for their exclusive home season slot in February-March every year. They will only get that slot in February-March 2020 as per the new Future Tours Programme [FTP]. Therefore, Kotla may or may not be in line for a Test match before 2020. As per the rotation policy, Kotla has now got its Test match and in November it got an ODI. Their turn will not come next year as India will perhaps have at the most one full fledged series. There are other venues waiting for their turn. Similarly in 2019, when the fresh Future Tours and Programme [FTP] starts, it will take some time for Kotla to get another game. Now what will be the environmental condition in 2020 can’t be predicted in 2017. So if Kotla doesn’t get a match, it will be purely because of rotation,” said a senior BCCI official, as reported by PTI. 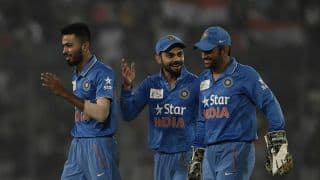