Former Australia international Shane Watson wants national selectors to put faith in players and avoid chopping and changing to instill confidence in them.

Former Australia international Shane Watson wants national selectors to put faith in players and avoid chopping and changing to instill confidence in them.

Citing the example of Usman Khawaja, Watson says dropping players based on one or two performances is counterproductive and a long rope will help them in maintain a clear head which ultimately translates into better show at international level.

Cricket Australia is set to announce squad this week for their tour of UAE where they play Pakistan in two Tests and three T20Is. A few Test hopefuls are currently in India touring with the A team and their performances during the unofficial Tests will be enough to put them on a plane to UAE. Opener Khawaja struck a century in the first match at Bengaluru as Australia A beat India A by 98 runs.

“I hope ‘Uzzie’ [Khawaja] gets a really good run,” Watson was quoted as saying by cricket.com.au. “He’s one of our world-class batsmen, across all formats. He just needs have the confidence instilled in him by the selectors and by the coaching staff, to let him play with the freedom he does when he’s at his best.”

With their two premier batsmen Steve Smith and David Warner currently in the midst of a year-long ban for their role in Newlands ball-tampering scandal, Watson says Australia are facing a drought in batting department and so sticking with Khawaja makes absolute sense.

In a stop-start career, Khawaja has scored 2226 runs in 33 Tests with six centuries and 12 fifties since making his debut in 2011.

“We don’t have a lot of world-class batsmen at the moment around Australian cricket and he’s absolutely one. But when he’s not getting selected all the time, he’s worried about failing. Then you can see him going into his shell and that’s not when he’s at his best. When he is at his best he’s one of the best ones we’ve got. So they need to look after him. If they keep playing him for one or two Test matches and then dropping him, that’s not getting the best out of him,” he said.

He advised the selectors to be more consistent and back the players they choose. “They just need get a lot more consistent with selection. Trust their instincts on who they pick and also trust they’ve picked the world-class players we’ve got and stick with them,” Watson observed.

Getting to the mental aspect of the affairs, Watson said “When you’re not performing in any walk of life, then you can sense when the heat is starting to come on. The biggest challenge, mentally, is not letting that infiltrate when you’re playing at your best.

“That’s where they need to get back to in Australian cricket. Give them the confidence that they have got time, they can play their natural game, not play someone in one Test match and then drop them.” 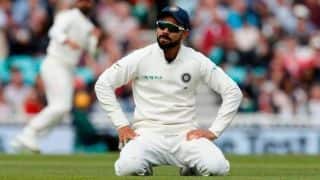