Australian captain Tim Paine believes his team's comprehensive win over Sri Lanka is a sign that the national side is well on it's way to recovery.

Australian captain Tim Paine believes his team’s comprehensive win over Sri Lanka is a sign that the national side is well on it’s way to recovery.

The Australians beat Sri Lanka by an innings and 40 runs in the first Test at the Gabba on Saturday, wrapping up the victory inside three days. (ALSO READ: Cummins stars as Australia crush Sri Lanka)

The win comes as a welcome boost to the Test side, who lost a series to India in Australia for the first time earlier in the summer.

Paine pointed out that seven of the team that played Sri Lanka were 25 or under and the younger players had all made good contributions.

And he said that bode well for the Ashes tour later this year.

“Any Test team that you can beat in three days is a huge effort,” he said.

“For a young group it’s really pleasing and will do the confidence a lot of good.”

Paine said the form of Cummins and the emergence of Richardson showed that Australia’s swing bowling stocks were healthy heading into the England tour.

“There’s no doubt you’ve got to have some options to be able to adapt to different conditions,” Paine said.

“We’re developing depth in all our positions.

“There’s guys all over the country that are bowling well. There are guys like (Chris) Tremain, (Dan) Worrall and (Peter) Siddle that can swing the ball to complement Hazlewood, Starc, Cummins and Richardson.”

Paine said the batting depth was also developing. “When (David) Warner and (Steve) Smith and (Cameron) Bancroft are back on the scene we’ve got a number of batters,” he said.

“The way Heady batted and Marnus — we’ve got (Matt) Renshaw and (Will) Pucovski on the scene as well.

“We’re really developing a depth of talent in all of our areas. We’re building quite nicely to having a really well-rounded squad of 15 or 16 players in the next 12 months.

The second Test begins in Canberra on Friday. 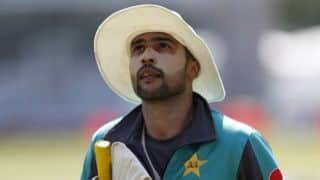