Ben Foakes had a memorable initiation into Test cricket as he became the first England wicketkeeper to hit a century in Asia.

Ben Foakes had a memorable initiation into Test cricket as he became the first England wicketkeeper to hit a century in Asia and that too on debut. He also equalled the record of the quickest dismissal on debut by a ‘keeper when he took a catch from the second ball of Sri Lanka’s first innings.

England went on to win the first Test against Sri Lanka by 211 runs to take 1-0 lead in the series thanks to a platform set by Foakes’ ton. However, the 25-year-old is under no illusion that the performance has sealed his spot in the playing XI and he will happily make the way for Jonny Bairstow should he be declared fit for the second Test.

“Jonny, I think, will be fit [for the second Test]. I guess he’s the No. 1 and if I play one game I’m quite happy with that one,” Foakes was quoted as saying by ESPNcricinfo on Friday. “The big thing for me is just making my debut and being able to say I’m an England Test cricketer. Regardless of what’s happened, that’s such a special feeling that no-one can take away. To be honest if you asked me two weeks ago, I was having six months off, so to be sat here now is unbelievable.”

Despite being in direct competition for the wicketkeeper-batsman spot with Bairstow, Foakes says that there he has received full support from his teammates. “It’s such a good team environment to walk into. Everyone wants everyone to do well. You can understand in some teams there’s different guys going for different spots, but there’s none of that.”

England captain Joe Root praised the youngster for showing maturity in pressure situation. England are now left with some difficult selections for the second Test which starts from November 14 but Root isn’t complaining.

“It’s really pleasing to see someone come in and really enjoy the occasion. He (Foakes) wasn’t overawed at all. He came in under pressure but played with maturity and an understanding of his own game in a difficult position. And he took every chance,” Root said.

He continued, “We’ve some difficult selections ahead, but I’m not complaining about that. It’s great to see the strength in depth in this squad. I’m going to enjoy that difficult selection meeting. It is going to be tough. But that’s what you want. You want guys performing, you want to make those tough calls.

“Ultimately, it’s about a group performing. Not making it about yourself being involved in the XI. It’s about being part of this squad. I think that’s the most important thing. The real achievement is to be part of this squad to hopefully go on to win this tour.” 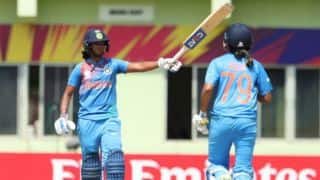