Ben Rohrer cracked a 40-ball unbeaten 64 and Mahela Jayawardene scored 34 to push Delhi Daredevils to a competitive total of 154 for four against the Rajasthan Royals in the 52nd match of ongoing IPL 2013 tournament on Tuesday. 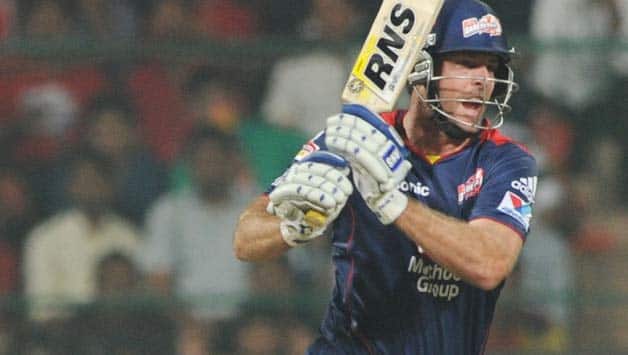 Ben Rohrer cracked a 40-ball unbeaten 64 and Mahela Jayawardene scored 34 to push Delhi Daredevils to a competitive total of 154 for four against the Rajasthan Royals in the 52nd match of ongoing IPL 2013 tournament on Tuesday.

Electing to bat after winning the toss, the star-studded Daredevils’ batting line-up misfired against an inspired Rajasthan bowling attack, as barring Rohrer and Jayawardene, other batsmen found it hard to flourish on a green top wicket at the Sawai Mansingh Stadium in Jaipur.

Rohrer struck his maiden IPL half-century from 38 balls with the help of eight boundaries, and it was largely due to his crucial 78-run stand for the fifth wicket alongwith Kedar Jadhav (23 not out) that pushed Delhi to a respectable total.

Rohrer reached 64 not ouf from 40 balls, hitting nine boundaries and a six, and thus registering his highest score in Twenty20 cricket.

The Daredevils once again made a shaky start, losing wickets early on which put their middle-order under pressure. Virender Sehwag was cleaned up by James Faulkner in the second over, deceived on a slower ball, and in the next, CM Gautam played a lose shot to give a simple catch to Rajasthan wicketkeeper Sanju Samson off Shane Watson.

Delhi got a much-needed boost in the fifth over of the innings when Jayawardene and David Warner punished Rajasthan pacer Shaun Tait for being wayward, scoring 17 runs off his second over of the game.

Tait by no means had control over his line and length, as his opening over of the match was an expensive one as well, with 11 runs coming off it. The Aussie pacer sent down as many as nine deliveries for six legitimate ones.

In the sixth over, Stuart Binny was introduced by Rahul Dravid to cut down the run flow. Binny kept Warner and Jayawardene under pressure in his first over and in the second, he provided Rajasthan the key wicket of Warner, getting him caught by Sachin Baby at extra cover for 13.

Warner’s fall brought compatriot Rohrer at the crease, but it was in the 11th over of the game when he got going with two boundaries off senior Rajasthan spinner Pravin Tambe.

Once again, Delhi lost a wicket at a crucial junction. Rohrer and Jayawardene had settled in and just when they started opening up, the latter fell to Siddharth Trivedi on the last ball of the 12th over. After hitting the first six of the game off the Royals’ seamer, Jayawardene failed to keep it on the floor and ended up giving a simple catch to Dravid at extra cover.

Jayawardene fell after a fluent 31-ball 34, studded with four boundaries and a six.

Tait’s disastrous outing against the Daredevils continued when he returned to bowl his third over — 17th of the match — as Rohrer smashed him for two consecutive boundaries towards point region. The right-arm pacer leaked 12 runs in that over.