Stokes looked well set and was probably eyeing for double ton but Indian pacer Umesh Yadav scalped his wicket in 153rd over of the match.

After Joe Root and Moeen Ali‘s twin-tons, England batsman Ben Stokes too did not miss the golden opportunity of scoring a hundred in India. Batting at number six, Stokes played a significant role in England scoring above 500, which is the first instance since 2012. Stokes came to the crease when England were four down for 281 on Day One and from there on, Stokes and Moeen began building another partnership and remained unbeaten till the day end. On the second day, after adding 32 more to their fifth wicket partnership, Stokes lost his partner Moeen but did not stop himself from scoring. Full Cricket Scorecard: India vs England 1st Test at Rajkot

Stokes stuck to his end without doing anything silly and did not allow the momentum to shift to India s side. Stokes, known as an aggressive batsman, was solid in his defense and picked up the bad balls with ease. He carried on in the same stead this morning and blasted few maximums enroute his fifty. Stokes was accompanied by Jonny Bairstow as England were marching forward in the first Test on a batting friendly track. This was his first Test ton against India and he became third batsman from England to score a hundred in this innings. Throughout his knock of 128 runs, he hit 13 boundaries and two sixes as well.

Stokes looked well set and was probably eyeing for double ton but Indian pacer Umesh Yadav scalped his wicket in 153rd over of the match. Earlier, he was dropped twice by wicketkeeper Wriddhiman Saha and because of that he could score this ton. Meanwhile, Stokes’ impressive knock brought much praise for him in social media and we present some of those interesting tweets here.

Brilliant innings from Ben Stokes. Going to be a huge profit in coming days for England. #IndvsEng

500 or more is banned in India right now. Didn’t anyone tell this to England batsman? #IndvsEng #CashCleanUp #everystepcounts Ben Stokes 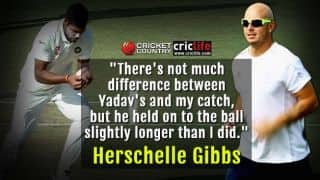