Stokes has not played international cricket since being suspended by the ECB following his involvement in an incident outside a Bristol nightclub.

Ben Stokes‘s long-awaited return to England duty could take place in his native New Zealand after the all-rounder was included Thursday in a 15-man squad for an ODI series against New Zealand “subject to any court obligations”. Stokes has not played international cricket since being suspended by the England and Wales Board (ECB) following his involvement in an incident outside a Bristol nightclub in September that reportedly left a man with a fractured eye socket. As a result, the Durham all-rounder missed the whole of England’s 4-0 Ashes series defeat in Australia.

But last month saw Stokes included in England’s squad for the upcoming triangular T20 series that is being co-hosted by Australia and New Zealand. However, English legal authorities then announced that Stokes was due to appear in a magistrates court on February 13 after he was charged with affray. That date clashes with what England had hoped would be Stokes’s planned international comeback in a T20 with New Zealand. England remain optimistic that Stokes will be available for all of a five-match ODI series that starts on February 25 but the complexities of the legal system mean they cannot be certain.

As a result Thursday saw the latest in a series of qualified ECB statements regarding Stokes, with the board saying: “Ben Stokes’s involvement is subject to any court obligations in relation to the incident in Bristol in September and his travel arrangements are yet to be confirmed.” Stokes, who had been Test skipper Joe Root’s vice-captain, was selected but later deemed unavailable for both the Test and ODI series in Australia. After he was charged, Stokes said he was “keen to have an opportunity to clear my name” but would wait for his court date.

“Walking out on to the field with the England shirt on is a privilege and a honour,” said Stokes after the T20 squad was announced. “I’m extremely delighted to be given this opportunity to do this again.” Stokes, who came to England as a boy when his father, a former New Zealand rugby league international, got a coaching job, sparked talk of a possible international recall by playing for New Zealand domestic side Canterbury for a month and last weekend, despite his looming court date, he topped the IPL auction, selling for US $ 1.96 million.

Stokes, signed by the Rajasthan Royals, will look to build on an impressive debut season in the Twenty20 franchise tournament last year. Under English law, affray, which refers to fighting in public, can carry a maximum sentence of up to three years in prison.

The remainder of England’s 15-man squad announced Thursday features the bulk of the players who defeated Australia 4-1 in a recent five-match ODI series. 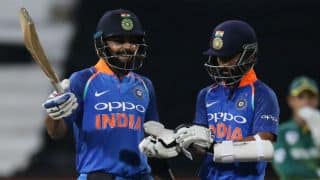