Stokes’ coach from childhood, Jon Gibson has revealed that the identity of the benefactor is in the knowledge of him, his wife and the cricketer.

Ben Stokes’ journey has been one of ups and downs but the England all-rounder has been a revelation in the past one year. The left-handed batsman, who has successfully established himself as the first-choice all-rounder in Test cricket, has already registered a fastest ever double century in the longest format of the game for England. While Stokes’ career graph is on a steady rise since last one year or so, it has been revealed that there was a mystery donator, who supported a wayward youngster during his formative years with financial help. Stokes’ coach is aware of the identity, but he has said that it will remain a secret forever. Live Cricket Scorecard: South Africa vs England, 2nd Test at Cape Town

Stokes’ coach from childhood, Jon Gibson has revealed that the identity of the benefactor is in the knowledge of him, his wife and the star England cricketer. However, he has asseverated that the identity of the mysterious benefactor will always remain a secret. “There was a benefactor, but we have said we are not going to tell anyone,” he was quoted as saying by the Telegraph. ALSO READ — Ben Stokes: Ruler of hard-hitting ‘Stoke’ing’ abilities

The coach said that watching Stokes smash records on the weekend was ‘very, very pleasing’, but added that he never expected him to represent England. Stokes moved to the UK when he was 12, with his family, and was a player who was erratic while enjoying the qualities of having power and ability. Live Cricket Score, South Africa vs England 2015-16, 2nd Test, Day 3 at Cape Town

Gibson said, “He was a bit raw in his first couple of years. He was very powerful, that was obvious, he was very, very strong and he was a natural timer of the cricket ball, but he was erratic in his technique. We ironed that out and he became a lovely player.”

“He loved practising, he would have spent seven days a week playing down at the club if he could. He threw himself into practice. We did some individual sessions through him with the winter,” the coach added.

Stokes’ father Gerard was a Rugby coach, but the boy had no pressure on him and he pursued cricket in England. Gibson added, “People say, did you think he was going to play for England? No of course I didn’t. In a small town you don’t get to work with people who go on to represent their country very often. He was the best I have I have ever coached, but was he going to play for England, how would I ever know?” 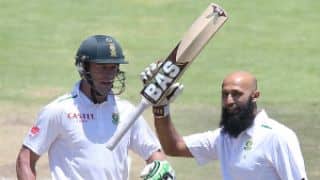