Ben Stokes has sustained a knee injury in the first Test against Sri Lanka.

England all-rounder Ben Stokes has sustained a knee injury in the first Test against Sri Lanka. Owing to this it is felt that he will not be able to bowl in the remainder of the match. On the second day, Stokes was forced to leave the field after his knee got hurt while he was bowling. On day three i.e. today, he came to field at the beginning but was never comfortable in the middle. He went back to the England team’s dressing room because of the injury. It is anticipated that he might not be able to field again. His availability for the second Test is now also doubtful. LIVE CRICKET SCORECARD: England  vs  Sri Lanka First Test, Day 3 at Headingley, Leeds

According to a report on Cricbuzz, England selectors will decide the new replacement after the conclusion of the first Test if Stokes is indeed ruled out of the series. Chris Woakes might get a chance then. Earlier, Stokes who was carved for four consecutive sixes in the World Twenty20 final against the West Indies on April 3, had said that “life is back to normal now”. LIVE BLOG: England (ENG) vs Sri Lanka (SL) 2016 Live Cricket Score, 1st Test, Day 3

The West Indies needed 19 runs of the last over to win their second T20 world cricket title and Stokes was given the ball by his captain Eoin Morgan. West Indies all-rounder Carlos Brathwaite, known for his big hitting skills, then clobbered the England bowler for four back-to-back over boundaries to secure the victory for his side in the contest. Stokes record in the earlier matches was quite good though he failed to deliver in the final. 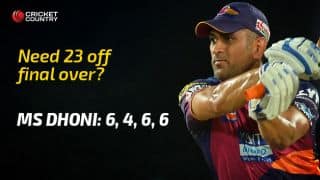