Ben Stokes took his Test-best figures as the all-rounder's six-wicket haul kept England spearhead James Anderson waiting for a landmark success on a dramatic start to the series finale against the West Indies at Lord's on Thursday.

Ben Stokes took his Test-best figures as the all-rounder’s six-wicket haul kept England spearhead James Anderson waiting for a landmark success on a dramatic start to the series finale against the West Indies at Lord’s on Thursday. A capacity crowd had gathered at ‘the home of cricket’ in the hope of seeing Anderson becoming the first Englishman to take 500 Test wickets. He moved to within one of the milestone by taking the first two West Indies wickets to fall on the first day of the third and final Test. ALSO READ: Stokes 6-for floors West Indies for 123, but England stutter at 46 for 4

But instead it was all-rounder Stokes who then did most damage as West Indies were shot out for 123, with the Durham paceman taking six for 22 in a near unplayable and unbroken 14.3 over spell of fast swing bowling spanning two hours either side of tea. Yet that was far from the end of the wicket-taking spree, with England slumping to 46 for four in reply a deficit of 77 runs before bad light eventually ended play for the day to leave the match intriguingly poised with the series all square at 1-1.

Stokes’s return saw him become just the sixth England cricketer to put himself on both Lord’s honours board that record all those who have scored hundreds and taken five wickets in an innings or 10 in a match in a Test at ‘headquarters’. When Stokes, who had only taken 10 wickets in six previous Tests this season, was asked if this was his best performance with the ball he replied: “Yes, I think so. It was obviously swinging when I got the ball in my hands and when it does swing like that, it’s a good opportunity just to run up and know it’s going to do something,” the 26-year-old added.

England captain Joe Root, who had only allowed Stokes five overs in the second innings at Headingley last week as West Indies won by five wickets, was happy to let his old friend keep going on Thursday.

“Rooty let me bowl for a long time, which I quite enjoy doing,” Stokes, who will resume on 13 not out on Friday, said. “Jimmy and I were a bit confused at one point, because he came to take his stuff off but I already had my hat and jumper off and Joe just said ‘Oh, keep going’.

“Then after that, he just told me ‘Keep going after the break as well’.”

Stokes paid tribute to the guidance he had received from England bowling coach and former West Indies paceman Ottis Gibson. This is Gibson’s last match in his second spell with England’s backroom staff before he becomes the new head coach of South Africa.

“The hard work contributes towards success, which is why I gave a little wave up to Gibbo he’s helped me over the last six or seven weeks,” said Stokes. “He’s put loads of hours in with technical stuff, bowling in the mornings. If it wasn’t for him, I’m not sure I’d have had a day like I did today. Obviously at Lord’s, the home of cricket, to be on one honours board (is great) … no one can take it away from you and I’ll always be able to say I’m on there through batting and bowling.”.

“It was difficult for people coming to the wicket with him bowling such an inspired spell, with the ball swinging prodigiously both ways,” he added. 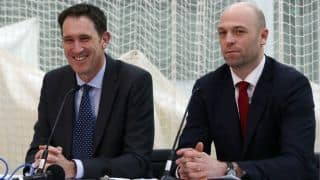