England all-rounder Ben Stokes on Friday said he felt as if “the whole world had come down” on him as he was hit for four consecutive sixes in the final over of the World Twenty20 final in Kolkata against the West Indies last Sunday. West Indies needed 19 runs to win and all-rounder Carlos Brathwaite tonked Stokes for four hits over boundaries to help his side win their second World T20 title. “I thought: ‘I’ve just lost the World Cup’,” Stokes was quoted as saying by the BBC. “I couldn’t believe it. It was just complete devastation.” FULL SCORECARD: England vs West Indies, Final Match

The 24-year-old, however, believes this incident will help him be a better player in the future. “Disappointment is the biggest emotion now. I remember getting the medal and thinking it’s just a runners-up medal. You don’t want it,” he said. “It will be a little bit of motivation to make sure this does not ever happen again. So train 10 minutes longer every now and again to get better.” ALSO READ: Eoin Morgan: Ben Stokes devastated after hammering by Carlos Brathwaite in T20 World Cup 2016; England share his pain

Stokes has garnered support from the likes of his captain Eoin Morgan and coach Trevor Bayliss and he insisted that given a chance he would bowl a last over of a big final again. “It is something I work at a lot,” he said. “Some days they go well. Some days they don’t. That was a bad day, but I won’t be shying away from it.”

The Durham cricketer also lauded Brathwaite’s post-match behaviour where the West Indies player called him a “brilliant lad”. “We did not have a beer with them afterwards but Brathwaite came up to me and asked for a shirt,” Stokes said.

“I wanted to make sure I spoke to them and say well done because I did not want people to think I was bitter. I wished them all the best. It is about respect to the opposition. What happens on the pitch stays on it.” 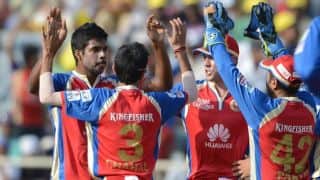