With no headway in the investigation surrounding Stokes, it is unlikely that the 26-year-old will feature in The 2017-18 Ashes anytime soon.

Regardless of all the hype surrounding his return, Ben Stokes was seen in the nets for Canterbury. Stokes signed up with New Zealand’s domestic team as an international entrant last week. He is likely to feature in Canterbury s one-day match against Otago on Sunday.

CCA gave Stokes the permission to play, after ECB handed the controversial all-rounder an NOC. Speaking to the press at Rangiora, Stokes said: It was the first time I have met quite a few of them (my new teammates) today. But it was nice to know a few faces, a few of the young guys came over to Durham as part of the exchange program.

It was nice because it can be hard coming to a new team. Hopefully I can get out there, do well, and contribute to Canterbury winning.

Excited to be back on a pitch tomorrow with Canterbury.Good days training out at Rangiora today and was great to meet the team pic.twitter.com/yAbNEWDkME

With no headway in the investigation surrounding Stokes, it is unlikely that the 26-year-old will feature in The 2017-18 Ashes anytime soon. 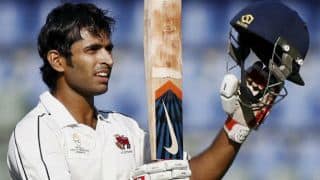