Following the brawl in the nightclub, Stokes was temporarily dropped from the England squad and was stripped off his vice-captain duties.

England allrounder Ben Stokes, who was acquitted of a criminal charge in August this year after he was involved outside a nightclub brawl in Bristol, southwest England in September last year, wants to put that side of past behind.

Stokes, part of the England squad that will face Sri Lanka in a one-off Twenty20 on Saturday, was charged by the England and Wales Cricket Board (ECB) for bringing the game into disrepute. Alex Hales, who was also present with Stokes during the gory incident, will appear before a Cricket Discipline Commission (CDC) in December.

“Look, it’s all about looking forward now,” Stokes told the BBC in Colombo on Saturday.

“We’ve got a huge summer coming up with the Ashes and the ICC World Cup, so I’m fully focused on that. Looking at things that went on [in the past] is not the way I like to think about things. It’s all about looking to the future.”

Following the brawl in the nightclub, Stokes was temporarily dropped from the England squad and was stripped off his vice-captain duties. “I have always viewed my career playing for England as being lucky to be in this situation and you appreciate that a bit more I guess,” he said.

Meanwhile, Stokes wants to make a sizeable contribution during the upcoming three-match Test series which begins with the first Test on November 6 in Galle. “I’ve never looked back on my career and my stats and said, ‘I wish I’d averaged this, I wish I’d averaged that’,” he said.

“I’d rather be remembered as a player who came on and impacted a lot of games for England.” 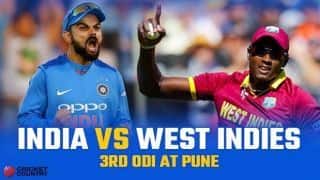