Rashid, has stuck to what the spin greats had to say to him and readied himself for the ups and downs.

Legspinner Rashid Khan has revealed that he’s benefitted from Shane Warne and Muttiah Muralitharan‘s advice of not making too many changes to his bowling and keeping a calm mindset during pressure situations. Hence, the No-1 ranked T20I bowler in the world and Afghanistan’s all-formats captain, Rashid, has stuck to what the all-time greats had to say and readied himself for the ups and downs.

“I asked Muttiah Muralitharan and Shane Warne, superstars of Test cricket, what should my mindset be in a Test match. They both told me that I shouldn’t change myself, and be cool and calm in every situation. [They said that I should] just focus on bowling in the right line and length, rather than bring down my speed. They said that the quicker you bowl, it deceives the batsmen,” Rashid said.

“I never brought any difference in my bowling in any format. I try to do what I am capable of,” he said. “I don’t want to bring any changes to my bowling. If I bring a bit of change, I think it will affect my bowling.

Rashid spoke to the media after the tri-series final between Afghanistan and Bangladesh was washed out and the trophy was shared. The 20-year-old captain however, did bring to everyone’s attention that it’s about time Afghanistan were exposed to a tougher, more fierce competition. Prior to the T20I tri-series which featured Zimbabwe as the third side, Afghanistan played a one-ff Test against Bangladesh, which as per Rashid, is not enough.

“We should have longer series against Bangladesh, like have the main focus on 50 overs and Test matches,” Rashid said. “Cricket boards should think about it. There should be a three-match Test series. There’s more room to learn and have different experiences. More 50 overs and Tests would be better for both nations.”

Rashid also stressed on the need to play series against stronger teams such as Australia and England. Afghanistan have a two Test and three ODI series lined up against Australia over the next three years and an ODI bilateral series against New Zealand sometime before the 2023 50-over World Cup. Rashid said that if Afghanistan are to continue their upward growth, the need to play more games against the top-cricket playing nations.

“We have played only twice against Australia, New Zealand and England in the last five years [all in World Cups]. If we played more against them, we could have known their strengths and weaknesses. It should be looked into,” Rashid added. “The best example is Bangladesh. They played a lot against South Africa and ended up having the best result against them in the World Cup. If we want to be a good side, we should play more against the top sides. Not one match in four years. These teams have four fast bowlers who bowl 140-plus. We play against Scotland and Ireland, and they hardly have a 140-plus bowler.”

As for missing the World Test Championship, Rashid is keen for Afghanistan to put up good performances in the longer format and hope that someday they will be part of the tournament.

“We are quite sad not to be part of the World Test Championship, but I think all we can do right now is play good Test cricket, to prove that decision wrong. But at the same time, you can’t put a side in the championship who have played only three Tests,” he said. 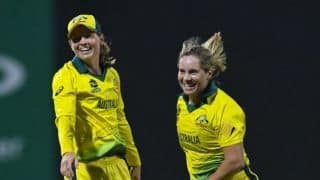