Apart from winning the coveted trophy in 2011, Tendulkar says the 2003 game against Pakistan is one of his favourite WC memories.

India skipper Virat Kohli might call it just another game to calm the nerves of his players ahead of Sunday’s blockbuster meeting between India and Pakistan at the World Cup, but everyone knows that a clash between the arch-rivals on the cricket field is nothing short of a carnival. Emotions run high, players look to seize the moment and make a statement and even the fans want boasting rights till the two teams face-off next time.

In fact, apart from winning the coveted trophy in 2011, the little master rates the 2003 game against Pakistan in Centurion as one of his favourite memories from playing in six World Cups for India.

“The best memory apart from lifting the World Cup has to be the 2003 match against Pakistan in Centurion. The kind of build-up that was there for that match and the way we played and the way we won. Also, the way we celebrated after the game and the way we progressed in the tournament after that was spectacular. Without any doubt, that has to be a special memory,” he told IANS.

Not many will forget the role Tendulkar played in that game when he hit a 75-ball 98 to set the ball rolling. Chasing 274 in a World Cup game against an opposition like Pakistan was never going to be easy, but the way Tendulkar started — smashing Wasim Akram to the covers boundary off the third ball of the first over — it was enough to puncture the morale of the opposition bowlers.

But for the maestro, more than his own Man of the Match-winning knock, it was the joy he brought to cricket fans in the country that remained etched in his memory. 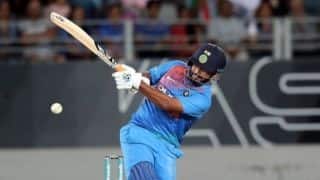