Kumar was named the Man of the Series for the recently concluded India s T20I series against South Africa.

One of India s most trust death overs bowlers, Bhuveshwar Kumar has yet again proven his credentials. Kumar was named the Man of the Series for the recently concluded India s T20I series against South Africa. Bhuvneshwar after the award, credited his rise to the Indian Premier League (IPL).

He said: It s all about how you prepare yourself before every series. IPL has made Indian bowlers thinking bowlers. It s important not to give away too many runs in the powerplay. You had to keep it simple and of course slower balls and knuckle balls were there. You hardly get wickets like these in India. Bhuvneshwar (7) was also the highest wicket taker in the series.

Bhuvneshwar recorded figures of 2 for 24 in the final T20I that included defending 19 runs in final over of the game to hand India a 2-1 series win. Earlier, he recorded a career best 5 for 24 in the first T20I as well. 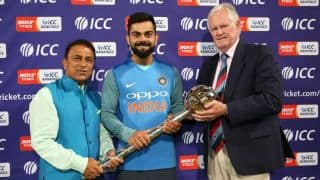