Bhuvneshwar Kumar was instrumental in India's 15-run win over England at Cuttack on Thursday.

India pacer Bhuvneshwar Kumar on Saturday credited the Indian Premier League (IPL) for his transformation as a death bowler and said the team would play without pressure as it aims for a clean sweep against England in the third and final ODI here on Sunday. Bhuvneshwar (23 wickets from 17 matches) emerged as the leading wicket-taker in Sunrisers Hyderabad’s (SRH) triumphant campaign in the IPL 2016. He was also the pick of the bowlers in the second ODI against England at Cuttack on Thursday.

“The way I’m bowling at the death, it’s all thanks to the IPL. A lot of bowling in the death in the IPL has added to my experience and given me the mindset. Keeping that in mind, I thought whatever I’ve done there I will do it here. It has paid for me. As soon as I was picked I was already playing for country. They were heavily dependent on me to bowl in the death,” the Purple Cap holder of the IPL 2016 said. Drafted into the side, the 26-year-old made the difference in a wayward Indian seam attack as he capped a brilliant opening spell with tight bowling in the death.

Back in the 42nd over with England needing 108 runs from 54 balls with a set Eoin Morgan and Moeen Ali in the middle, Bhuvenshwar stopped the free-flowing English batsmen and dismissed the latter for 55 in the 44th over before finishing his quota with 10-1-63-1.

Recalling his final spell in Cuttack, Bhuvneshwar stated, “I knew I had five overs left. I knew it can swing either ways. I had experience how to bowl thanks to IPL. There was pressure, dew was there. But the moment I bowled the first over (42nd), I got my confidence back. You need an over to get your confidence going. It was an over that boosted my confidence.”

He was also successful in bowling yorkers on a day the likes of Jasprit Bumrah and Hardik Pandya struggled to find the block hole with a wet ball. He said practicing with the red ball has helped him bowl them under heavy dew.

“It’s most difficult to bowl with wet ball. Before that match we were practicing with red ball”, he added.

India having sealed the series after their win in Pune and Cuttack, the Indian seamer said it would give them a chance to express themselves in a pressure-free game.

“Pressure is over. No pressure now, having won series but you want to win in each and every match. You will enjoy this more than the last two games, knowing that we have won the series,” he said.

With 700-plus runs being scored in both the games in the series, he said they have become used to it.

“We now know that 350 is a normal… a par score in ODI cricket. That’s how we plan our practice. You know you’ve to bowl fast. It’s difficult as we’re coming from an era where 250-plus was a par score. But it’s not safe anymore. It’s not easy to bowl as a bowler especially at the death overs”, commented the 26-year-old.

On his comeback, Bhuvneshwar who played his first ODI match after one year, said, “It’s tough when you’re playing after a long time. There is nervousness but it’s not because of lack of preparation. Preparation goes on even when you’re out of the team as you can do it anywhere. I was putting my best at the nets, as best as I can”, concluded the pacer. 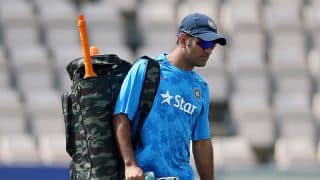