Playing at Maharashtra Cricket Association Stadium in Pune, Bhuvneshwar Kumar took 3 for 45 and was rightly adjudged Player of the Match.

India won the second ODI by 6 wickets, levelling the three-match series 1-1. Playing at Maharashtra Cricket Association Stadium in Pune, Bhuvneshwar Kumar took 3 for 45 and was rightly adjudged Player of the Match. The series decider will be played at his home ground Green Park, Kanpur on Sunday. The focus is to replicate what I practice, during the match. Whenever I bowl with the new ball, I try to swing it. It didn’t happen today, so I was focused on bowling in good areas, said Bhuvneshwar after the match.

Bhuvi s first victim was Martin Guptill. He pitched it slightly outside off and swung it away from Guptill, inducing an edge. The second wicket was the best of all: with the seam pointing towards leg-slip, the ball darted into Colin Munro and dismantled his defence. However, it was a knuckle ball that Bhuvi disguised it as a regulation out-swinger. His third wicket was that of Henry Nicholls, the highest scorer in New Zealand s innings.

When you’re confident, things get easier. Thanks to management, they keep motivating me. I’m not a muscular guy. If you compare to last couple of years, I feel much stronger when it comes to fitness, concluded Bhuvi. 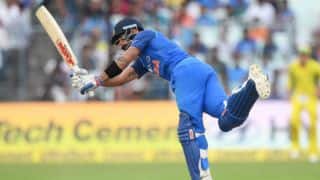