A rollicking first session between India and South Africa ended with the latter placed at 107 for 3 at lunch on Day One. Electing to bat, South Africa were dented with Bhuvneshwar Kumar‘s triple strikes coupled with extra bounce and movement off the surface. Since then, AB de Villiers‘ counterattack and skipper Faf du Plessis has led to South Africa’s revival.

The first over turned out to be an eventful one. Bhuvneshwar showed exactly why he is rated so highly in the Indian camp. He was on the money, and removed openers Dean Elgar and Aiden Markram quickly. Elgar fell off the third ball, falling prey to extra bounce. He edged one a premeditated inswinger, which held its line. Markram followed suit. He was deceived by an incoming delivery, and was trapped in between. The right-hander didn’t even bother to review, and walked off straight away.

Hashim Amla was the next to fell. Bhuvneshwar’s good length ball held its line and Amla departed, trying to play his favourite back foot punch. Having faced only 10 deliveries, it wasn’t the ideal ploy and Amla paid the price.

In the ninth over, the scenario started to change. It was either counter-attacking at its best, or putting the bad balls across the ropes. De Villiers took on Bhuvneshwar off fuller and short-wide deliveries. The over conceded 17 runs, with 4 fours.

Jasprit Bumrah 290th Test player for India came into the attack in the 10th over. He derived extra bounce at regular intervals, and troubled de Villiers. Nonetheless, it will be interesting to see how the youngster holds up and remains patient. He dropped in some fuller length deliveries and eased pressure. Bumrah, along with Bhuvneshwar, would have to choke the opposition post lunch. On the other hand, Mohammed Shami looked out of sorts and will have to start afresh.

De Villiers and Faf have added 50-run stand for the fourth wicket, and will like to tire the Indian bowlers before charging in the final session. De Villiers remains unbeaten on 59* (41st half-century).

India’s fielders have to stop the quick singles as well. After the initial success, they have lagged behind.

First 50+ stand between De Villiers and Du Plessis in Tests in over 4 years.

Their last was also against India, 205 runs when chasing in Johannesburg in Dec 2013. #SAvInd 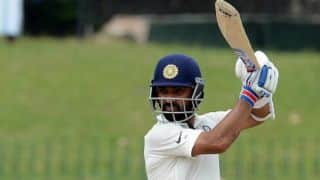 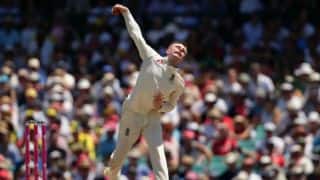