Kumar had a successful sports hernia surgery on January 11, a BCCI statement read. He will be returning to India and report at the Academy. 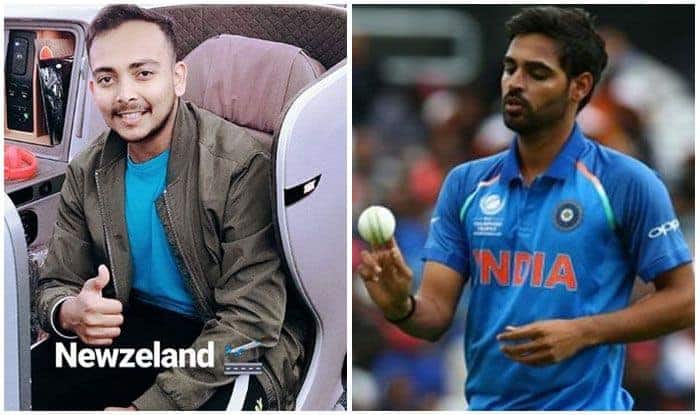 After recovering from his shoulder injury India’s young batting sensation Prithvi Shaw has left for New Zealand to be part of India A squad and is available for selection for all formats, while right-arm quick Bhuvneshwar Kumar underwent s successful surgery in London and to the National Cricket Academy (NCA) for rehabilitation.

Kumar had a successful sports hernia surgery on January 11, a BCCI statement read. He will be returning to India and report at the Academy.

“Fast bowler Bhuvneshwar Kumar travelled to London on 9th January and underwent a successful sports hernia surgery on 11th January. He was assisted by Team India physiotherapist Yogesh Parmar. Bhuvneshwar will now return to India and commence his rehabilitation at the National Cricket Academy (NCA) in Bengaluru,” read the statement.

On my way to New Zealand. Really excited to join my teammates. One of my favourite places where we won the ICC U19 World Cup in 2018.❤

Adding an update on young Shaw. the statement read, “Opening batsman Prithvi Shaw has completed his rehab at the NCA and has recovered from his left shoulder injury. He has been made available for selection for all formats of the game. Prithvi has left for New Zealand and will soon join India A.”

Shaw had injured his shoulder while playing in the Ranji Trophy 2019-20, but managed clear the mandatory yo-yo test at the National Cricket Academy in Bengaluru and will fly down to New Zealand to join India A squad.

Bhuvneshwar, who last played for India against West Indies T20I series at home in December last year, is looking at a lengthy rehabilitation process that will put him out of action for at least six months and possibly out for ICC T20 Cricket World Cup 2020.