Bhuvneshwar Kumar‘s father Kiran Pal Singh has expressed his unhappiness over his son being gifted a bottle of champagne along with a cheque after he won the Man of the Series award. Bhuvneshwar was nominated by England coach Peter Moores as the best performer from India in the series.

“I watched the presentation ceremony after the Test match on Sunday. The huge-margin defeats [in the series] hurt more than Bhuvi winning the MoS award”, he was quoted as saying by The Observer.

Bhuvneshwar’s father believes the tradition of giving champagne along with awards to Indian players should be stopped.. “My son is a teetotaller and don’t know what he would do with this bottle. Bhuvi does not smoke, or even touches a glass of wine. I don’t think this practice of gifting champagne bottles exist in other countries. It should be stopped”, he added.  The Meerut pacer’s sister Rekha said that though he has never touched a wine bottle ever, he is matured enough to take a call.

Colin Gibson, the ECB’s Media Director, thogh defended the decision mentioning that it’s a tradition in England and many other countries. “The champagne bottles are supplied by sponsors. It is traditional in many countries not just England. Champagne is also celebratory in other sports such as motor racing. This has/had been a practice in Australia, South Africa, West Indies, New Zealand and at some ICC events. In India there is sometimes something like a motor cycle from the sponsors which is not likely in England,” he said. 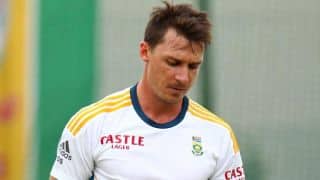