Bhuvneshwar's injury will certainly give sleepless nights to MS Dhoni and Duncan Fletcher.

Seamer Bhuvneshwar Kumar‘s swollen ankle will certainly keep the Indian team management worried ahead of their fourth Test match against England at the Old Trafford starting August 7. With Ishant Sharma already out of the fourth Test with ankle injury, India’s most consistent bowler in the series, Bhuvneshwar’s injury will certainly give sleepless nights to MS Dhoni and Duncan Fletcher.

Bhuvneshwar along with Ishant Sharma didn’t take part in the customary football session after India lost the Test on the first session of the fifth day itself. The UP seamer, who has 15 wickets apart from 228 runs in the series, has so far bowled 124.5 overs (only second to left-arm spinner Ravindra Jadeja‘s 142.3 overs) might have been a bit “tired”, according to skipper Dhoni.

“I think, Bhuvi  [Bhuvneshwar Kumar] seemed to be a bit tired,” Dhoni told reporters at the post-match conference. “But he came back nicely after that first spell. But I thought he was slightly on the shorter side. He got the right length in the first two Tests, but here he was slightly short. Apart from that I am quite happy with the effort put in by fast bowlers,” Dhoni added.

With five more days to go before the start of the fourth Test, Dhoni would be praying that his premier seamer gets fit in time for the important encounter. 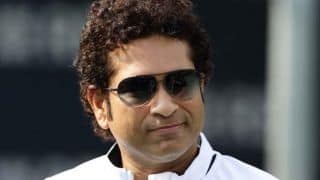