India‘s unbeaten 87-run 10th-wicket pair salvaged some pride for the visitors as they crashed post lunch session on Day Two of the first Test against England at Trent Bridge on Thursday. Bhuvneshwar Kumar and Mohammed Shami have taken India from a precarious position to a commanding one as India reached 433 for nine at tea. Bhuvneshwar is unbeaten on 46 while Shami is on 39.

Resuming on 342 for five, 20 minutes in to the second session India had lost four wickets for two runs in a space of 20 deliveries. On a pitch that was considered as a gift for subcontinent sides, India clearly threw away the momentum. Call it complacency or the price for playing the natural game, but MS Dhoni will be ruing for losing the control gained through his painstaking effort and Murali Vijay’s 146.

After losing Vijay half an hour before lunch, Ravindra Jadeja came in before debutant Stuart Binny. Known for his aggressive instinct, Jadeja was hammered Moeen Ali for two sixes. At break, Jadeja and Dhoni had added 38 in six overs. With that kind of aggression, the wicket-taking opportunities was always there for the taking. It was Ben Stokes who struck with his first wicket on England soil removing Jadeja for 25. From thereon it was nothing less than a brain-freeze situation. Dhoni called for a tight single underestimating Anderson’s abilities to hit the stumps. A fighting innings of 82 was given away so casually and left the debutant Binny to figure out a way to drag the innings closer to 400.

Within a matter of minutes, Binny was cooling his heels in the dressing room after driving straight to extra-cover, and Ishant was bowled by Stuart Broad. From 342 for five, India had slipped badly to 346 for nine. But England seem to have a bigger mental block against the last-wicket pair than their Indian counterparts. It was at this same venue, Phil Hughes and Ashton Agar had put on a record 163-run last wicket stand in the Ashes last summer. Debutant Agar was dismissed for 98.

The last wicket stand here deserves a separate mention. While the Indian dressing room was bracing up to coming out to bowl, Bhuvneshwar was busy defying the pacers. Bhuvneshwar looked more comfortable against the pacers while Shami somehow managed to hang around. The former did try to protect Shami but after a few overs, they were playing freely. As the partnership progressed, a frustrated Cook even got Moeen Ali to break the stand. At one point, Cook had three close fielders in a line from mid-on to midwicket to push a wristy Shami to flick. But Shami proved to be a much matured batsman and flicked it fine towards deep square-leg with one of them being a boundary.

400 looked like distant dream at 346 for nine but Shami and Bhuvneshwar stuck together to make that possible. The umpires allowed additional 30 minutes of play since it was the last wicket. But they didn’t consider how well set these two were. England look completely clueless and all the runs scored in the last session will be a continuation of the bonus runs. 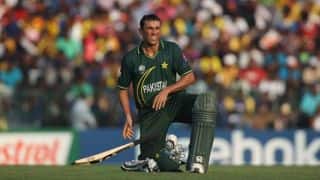 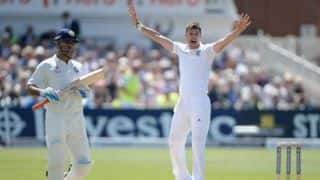