Currently, Sixers are six for the loss of one after 2.3 overs with Riki Wess4els batting on two.

Sydney Sixers English batsman, Michael Lumb was dismissed for just three by Nathan Coulter-Nile during the finals of the Big Bash League against Perth Scorchers at the Manuka Oval in Canberra on Wednesday. Currently, Sixers are six for the loss of one after 2.3 overs with Riki Wess4els batting on two while Nic Maddinson makes his way in.

Earlier, Sydney Sixers won the toss and elected to bat first. Perth Scorchers have reached the final of Big Bash League in all three previous occasions. However, Scorchers only won the tournament last year. On the other hand, this will be Sydney Sixers second final after having reached and won in 2011-12. The final will also mark Brett Lee’s last match as the Australian veteran decided to hang up his boots at the end of the season. 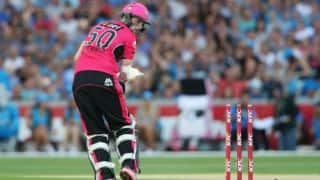