Moises Henriques and Ryan Carters took control of the innings after the 14th over.

Sydney Sixers finished on 147 for four against defending champions Perth Scorchers in the final match of the Big Bash League 2014-15 at the Manuka Oval in Canberra on Wednesday. Skipper Moises Henriques was the highest scorer in the innings, with an innings of 77.

Henriques won the toss and elected to bat first. However, openers Michael Lumb and Riki Wessels were off to a shaky start with both being dismissed for three and two respectively, with the score reading less than 10. Out came Nic Maddinson, and along with skipper Henriques put on a few quick runs. Maddinson too didn’t last long, and was dismissed for 19 after being bowled by Yasir Arafat. He was soon followed by Jordan Silk, who too was dismissed by Brad Hogg for just three while the score read 49.

However, following his dismissal, Henriques and Ryan Carters took control of the innings and just past the 14th over, both the batsmen started playing some big shots. The pair brought up was proved to be a crucial 50-run stand for the fifth wicket. Henriques went on to register his half-century off 40 deliveries. He, along with Carter, dominated the remainder of the innings as they finished the 20 overs on a defendable score of 147. 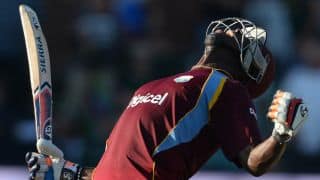