Perth Scorchers batsmen, Shaun Marsh and Michael Klinger put-up the opening 50-run stand against Sydney Sixers in the final of the Big Bash League at Manuka Oval in Canberra on Wednesday. Marsh contributed 26 while Klinger contributed 23.

Earlier, Sydney Sixers won the toss and elected to bat first as they put up a score of 147 and set a target of 148 for Perth Scorchers to win their third title. Perth Scorchers have reached the final of Big Bash League in all three previous occasions. However, Scorchers only won the tournament last year. On the other hand, this will be Sydney Sixers second final after having reached and won in 2011-12. The final will also mark Brett Lee’s last match as the Australian veteran decided to hang up his boots at the end of the season. 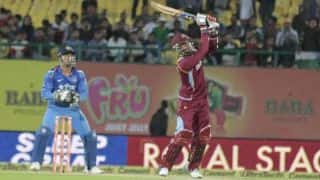