The second new face in the current Strikes roster for BBL 8 is the 24-year-old allrounder Cameron Valente.

“It’s exciting news that I get the opportunity to play for another four years at Adelaide Oval and in the blue, said Head on Wednesday. “It’s an amazing time of the year, playing in front of my friends and family and Christmas time, for me it’s always a great time to be around and 50,000 at Adelaide Oval, it’s hard to go by.”

Head finished the last BBL season with 374 runs and was named Man of the Match in the semi-final versus Melbourne Renegades, which Strikers won off the last ball with Head 85 not out. Since 2014, Head has made 988 runs for the franchise.

In September, Head was drafted into Australia’s Test squad for the tour of the UAE.

The second new face in the current Strikes roster for BBL 8 is the 24-year-old allrounder Cameron Valente who has previously been on the rosters of Perth Scorchers and Brisbane Heat.

To have our home-town captain Travis Head re-commit on a long-term deal is fantastic for the club and this state, said Strikers coach Jason Gillespie. Cameron Valente joins us as a genuine allrounder who is handy at the death and also a fine striker of the ball. We are excited for Cam and believe that he rounds out our squad nicely and gives it considerable strength for the upcoming season.

Strikers open their BBL 9 campaign on December 16 in Brisbane versus the Heat, followed by a game with Adelaide Strikers in Adelaide on December 23. 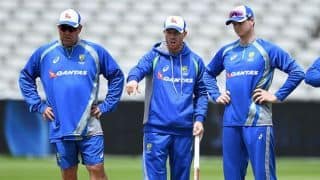