For Scorchers, the defeat meant that they ended at the last spot in the points table with four wins and ten defeats.

Adelaide Strikers ended their KFC Big Bash League campaign on a winning note and managed to avoid a bottom-placed finish after they beat Perth Scorchers in Adelaide on Saturday.

Jonathan Wells (69 off 42 balls) and Harry Nielsen (44 not out off 29 balls) starred with the bat as Strikers chased down the 175-run target with 5 wickets in hand and four balls to spare at the Adelaide Oval.

Electing to bat, the Mitchell Marsh-led Perth Scorchers scored 174. Josh Inglis (55 off 37 balls), Cameron Bancroft (22 off 13 balls), Marsh (50 not out off 41 balls) and Nathan Coulter-Nile (25 off 8 balls) made sure Scorchers put up a respectable total on the board. However, Strikers did not break much sweat to earn the two points and secure a win. (ALSO READ: Big Bash League: Nathan Coulter-Nile suffers bad bout of vertigo , rushed to hospital)

While the defending champions Strikers could not do a repeat of their last-year s show, the win in their final game of the season helped them to avoid a last-place finish. The Travis Head-led unit were in a spot of bother after being reduced to 64/3 but Wells and Nielsen s 88-run partnership helped the Strikers seal what eventually turned out to be an easy win.

Scorchers pacer Coulter-Nile, meanwhile, had to be rushed to the hospital after he suffered a bout of vertigo. Cricket.com.au later tweeted that Nathan Coulter-Nile on the mend, resting and rehydrating after he was struck with a bad bout of vertigo after bowling against Adelaide #BBL08.

For Scorchers, the defeat meant that they ended at the last spot in the points table with four wins and ten defeats in fourteen matches. 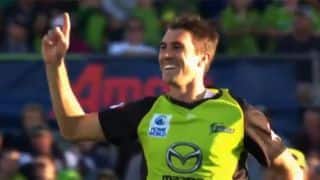