Australian captain and Rebel WBBL|01 Player of the Tournament Meg Lanning will start this year s tournament as the number one ranked batter, while South Africa and Sydney Sixers quick Marizanne Kapp sits atop the bowling rankings.

Australian captain and Rebel WBBL|01 Player of the Tournament Meg Lanning will start this year s tournament as the number one ranked batter, while South Africa and Sydney Sixers quick Marizanne Kapp sits atop the bowling rankings.

Melbourne Renegades recruit Grace Harris, who was the only player to score a century in Rebel WBBL|01, will start the second edition of the tournament as the number one ranked all-rounder.

The Rankings system, devised by esteemed Bond University Professor Steven Stern the man who also lends his name to the Duckworth-Lewis-Stern method used for recalculating rain-affected run chase targets with Cricket Australia, uses performances from both current and past Big Bash matches, weighted on a sliding scale.

Rebel WBBL|02 games will carry a full weighting in order to provide the most accurate, up-to-date measure of player performance.

Lanning scored 560 runs in the competition s inaugural season 98 more than her nearest rival at an average of 56.00 during an outstanding run with the bat that included five half-centuries. She sits 14.6 points clear of New Zealand and Sydney Sixers batter Sara McGlashan (29.2) who comes in at No.2, while Harris is just 1.4 points behind in third spot. Fast-bowler Kapp took 17 wickets in Rebel WBBL|01, but it is her economy rate of 4.28 the competition’s best that secures her spot on top of the bowling charts. Kapp sits a whopping 25.4 points clear of No.2 ranked Heat quick Holly Ferling (13.5), followed by Sydney Thunder all-rounder Nicola Carey (12.7).

Professor Stern formulated the KFC BBL Official Rankings system for bigbash.com.au with Cricket Australia in the build-up to the BBL|05 season, with the concept largely based around the comparative impacts of each individual player in a match. Throughout Rebel WBBL|02, bigbash.com.au will reveal regular updates for the top 10 batters and bowlers, and the top five all-rounders. To purchase tickets or for more information about WBBL|02 or BBL|06, visit www.bigbash.com.au. 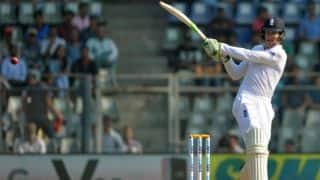 Bangladesh vs New Zealand: Shafiul Islam ruled out due to hamstring injury