Billy Stanlake also registered the 14th instance of a bowler taking 4 or more wickets for the cost of less than 10 runs in a T20I.

Billy Stanlake tore the heart out of the Pakistan top-order today at Harare Sports Club. He finished with figures of 4-0-8-4. These are the second-best figures by an Australian in T20 Internationals, after James Faulkner’s 4-0-27-5 at Mohali in the 2016 World T20, also against Pakistan. Stanlake also became the first Australian to take 3 or more wickets in a T20I while conceding less than 10 runs (Glenn Maxwell has a 2-0-10-3).

Stanlake took a wicket in every single of his overs. He had Mohammad Hafeez caught by Aaron Finch at first slip with the third ball of his first over. With the fifth ball of his second he had Hussain Talat with a short-pitched delivery, Finch taking a brilliant catch at gully. Fakhar Zaman went off the third ball of Stanlake’s third over, caught-behind down the leg, by Alex Carey. And Sarfraz Ahmed fell the second ball of his fourth over, cramping Sarfraz with a short-pitched delivery and having him caught by Finch at slip.

This was also the 14th instance of a bowler taking 4 or more wickets for the cost of less than 10 runs in a T20I. Umar Gul has done this thrice, including two five-wicket hauls. 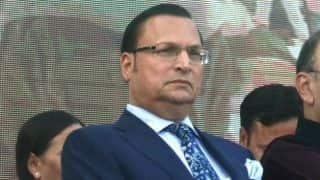 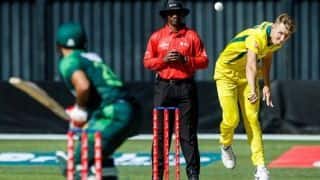