Before making his Test debut, Hasan has the experience of only 12 First-Class games in which his bowling average is 21.

Bangladesh s new bowling sensation Mehedi Hasan, who made his debut in the first Test against England has impressed everyone in the cricket fraternity. In his debut Test, Hasan scalped six wickets in the very first innings and in the second Test, he turned the entire match in favour of Bangladesh with his stunning bowling. Hasan, who was playing beside experience spinners of Bangladesh, such as Shakib Al Hasan and Taijul Islam, the 19-year old spinner did exceptionally with the ball and made English batsman struggle . This is not the first time that Hasan has impressed with his bowling, in fact, during the ICC U19 World Cup, earlier this year, the teenage sensation earned the Player of the Tournament award.

Before making his Test debut, Hasan had only played 12 First-Class games in which his bowling average read 21. Had there been no Hasan in this Bangladesh s team, then surely, England would have clinch the victory in the second Test. Hasan was a surprise package in the Bangladesh attack which England could not deal with it and gave their 19 wickets to this young bowler in his maiden Test series. Bangladesh has been among those nations in cricket which is expected to produce some exceptional and in last two years, they have done it quite frequently.

Be it Soumya Sarkar, Mustafizur Rahman, Sabbir Rahman or Hasan himself, Bangladesh are currently on the rise and with talented players getting added in their side. There is still a long way to go for Hasan but right now, he has been receiving applauds from cricket fraternity for his bowling and we present those reactions from social zone.

What a comeback from Bangladesh in this series. Mehedi Hasan. Good series to watch. Bangladesh cricket is heading the right way.

History for Bangladesh. And goodness they’ve deserved it. A star is born in Mehedi Hasan.

The confidence and skill shown by Mehedi Hasan is incredible.

Ten wickets in the match for 19-year-old Mehedi Hasan as Cook goes, extending England’s post-tea collapse to 5 for 27.

All credit goes to Mehedi Hasan Miraz for the historic win! A new stage set for the longer format!

What a moment for @BCBtigers superb win against England. Mehdi Hasan and sakib were brilliant. Roll over after the first wicket fell.

Mehedi Hasan Miraz is a decent enough bowler but whats he like in Leeds on a damp Tuesday in April?

Hasan will be sorely tested in Bangladesh s next assignment which will be against the Kiwi in New Zealand. 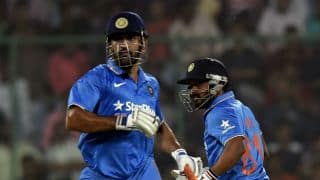 Sourav Ganguly: MS Dhoni would have been under pressure to retain captaincy had India lost to New Zealand