BJ Watling completed the feat in the second Test between New Zealand and India in Wellington.

BJ Watling has completed the milestone of crossing the 1,000-run mark in Test cricket. He achieved the feat in New Zealand‘s second innings of the second Test against India in Wellington on February 16, 2014. This is Watling’s 21st Test match.

New Zealand are at 183 for five after 75 overs on Day Three. They trail India by 63 runs. Watling got to his milestone with a four behind square on the leg side. Mohammed Shami bowled a short and wide delivery and the New Zealand wicketkeeper batsman played the cut shot.

He is batting on 41 and Brendon McCullum is on 63. McCullum completed his 29th half-century in Test cricket earlier in the session. Watling entered the match with 968 runs in 20 Tests. He was out for a duck in the first innings. 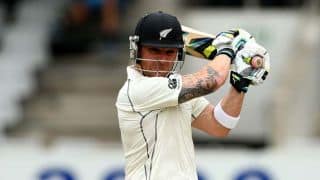