It was unbelievable. Or was it? Having played brave, attractive cricket all tournament, South Africa stumbled when it most mattered. Yet again, in a knock-out situation, South Africa combined to choke. Having done so well in the field to keep New Zealand to 221, South Africa choked. 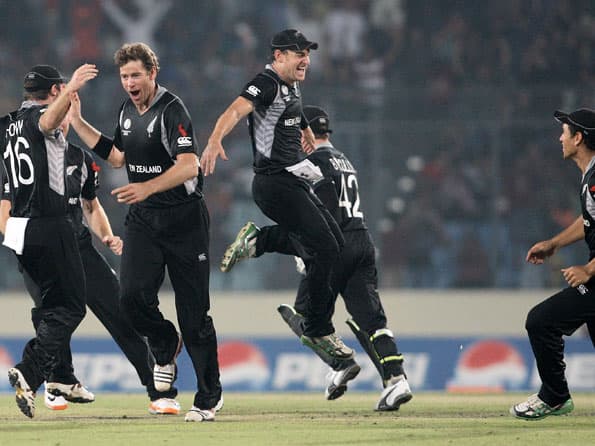 It was unbelievable. Or was it? Having played brave, attractive cricket all tournament, South Africa stumbled when it most mattered. Yet again, in a knock-out situation, South Africa combined to choke. Having done so well in the field to keep New Zealand to 221, South Africa choked. From the comfort of 108 for two, with Jacques Kallis well set on 47, they choked.

Eight wickets went down for 64 runs in 19.3 overs. New Zealand fought valiantly, led by Nathan McCullum and Jacob Oram, fielded like champions, never let up the pressure, and booked themselves in the semi-finals for the fifth time. Few would have imagined it, but such was South Africa s fragility and New Zealand s temerity.

South Africa s chase wasn t without jitters, as you would expect from a side which has repeated failed in knock-out situations, but even the loss of the openers didn t make you think such an implosion was on the cards. Hashim Amla was freakishly caught at slip after edging a cut off Nathan McCullum onto Brendon McCullum s right boot, and after another scratchy innings Graeme Smith steered to point (69 for two).

Kallis and AB de Villiers went about their work without fuss, driving and clipping and cutting with ease. All was well with the world. Or so it seemed. Kallis had looked in total control until, just short of a fifty, he swung Tim Southee out to Oram at deep mid-wicket. Cue the panic.

Daniel Vettori knew exactly what to do when JP Duminy came to the middle. Immediately he called back Nathan McCullum, aware of Duminy s struggles against off-spin. Sure enough, Duminy, cramped for room, attempted an expansive cut and was bowled. Two balls later, de Villiers was run out trying to pinch a sharp single, as Martin Guptill swooped in and let go a superb throw to the keeper.

New Zealand were cock-a-hoop, South Africa shaking. Oram, the man who had taken a great catch on the boundary to cut off Kallis, came back and pegged back Johan Botha s off stump with his fourth ball. He wasn t done, and taking the newer ball pitched it wide to draw a loose flail from Robin Peterson. Neither was Nathan McCullum who rounded off an exemplary outing by getting Dale Steyn to flash to point. The off-spinner was the outstanding bowler of the evening, conceding just 11 runs from his last eight overs.

Faf du Plesssis went for his strokes as the pressure mounted, but Oram extracted him to grab his third. The end came soon after, as Morne Morkel picked out long-off off the bowling of Luke Woodcock. Unbelievable scenes unfolded as an ecstatic New Zealand outfit leaped and hugged and shouted, while a shell-shocked South Africa looked on grimly. Not for the first time, their World Cups hopes had unravelled in spectacular fashion. Smith and his team-mates have much to ponder.

It was an incredible end to a match whose first half had been decidedly sober. Vettori s decision to bat first had appeared in danger of backfiring as South Africa dismissed the openers cheaply. Peterson snatched a diving return catch to send back Brendon McCullum, and Botha held an easy catch at mid-off to get Guptill off Steyn. A solid rescue act followed, as Ryder and Taylor nursed New Zealand back into the game.

Ryder, playing confidently off front foot and back, blunted Peterson and Botha s wares and took runs off a wayward Morne Morkel. With three boundaries off Morkel, some momentum had been wrested back and Ryder was away. He cracked a majestic drive through cover and cut four firmly past point, forcing Smith to swap Morkel for Kallis.

Taylor played and missed a few times, with the pitch affording both appreciable seam movement and bounce, but once his trademark square-drives started to find their range, the complexion of the innings changed. With the more graceful Ryder playing some gorgeous strokes down the ground, Taylor nudged the ball around and a fruitful stand was formed.

As is so often the case, it was the bowling change that did the trick, with Imran Tahir s leg-spin tempting Taylor into a false heave and Morkel accounting for Scott Styris as the bat started to be thrown around. Tahir was rewarded for aggressive bowling when he got Ryder to pick out one of two fielders deep on the leg side and Ryder s response summed up the significance of that dismissal.

Those three blows, within the space of six overs of each other, caused a sharp decline in the scoring rate, as Kane Williamson was forced to do the rebuilding act. Williamson shepherded the team sensibly through till the end, squeezing 37 off the batting Powerplay as wickets fell around him, and what an effort that turned out to be.

The Big 'C': A South African conundrum that has now assumed monumental proportions