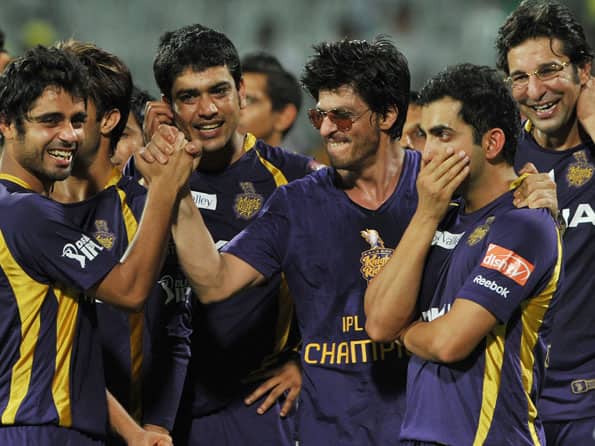 The 46-year-old actor, who is the co-owner of the team along with Juhi Chawla and Jay Mehta, cheered for the team at the MA Chidambaram stadium with wife Gauri and daughter.

KKR became the new champions of the fifth edition of the sporting extravaganza as they defeated defending champions Chennai Super Kings by five wickets in a nerve-wracking final match last night.

Preity Zinta tweeted, “Just landed in India and heard the good news! Congrats iamsrk, Gauri and KKR for winning IPL 5! I’m sure tonight the Party is not gonna end! (sic)”

“The badshah and his team does it… in style,” Shreyas Talpade posted on the micro-blogging site.

“I know nothing about cricket but I watched the match and prayed really hard for KKR to win! Congrats to the team, SRK and Juhi. Maza aa gaya (Had fun),” said Shabana Azmi.

“And KKR are the Winners, yayyyy, congrats SRK and the team, you gave us a super game, well played CSK (sic),” Genelia D’souza wrote.

“I wanted KKR to win for Shah Rukh’s daughter.. Oh God.. She was so tensed.? She must be feeling great now.. Three Cheers for her… KKR is Champ,” posted Satish Kaushik.

Director Kunal Kohli said, “The most touching moment of the match was when iamsrk’s daughter hugged him all tense and he comforted her. What a sweet moment that was.” (PTI)